Competitive Snowmobile Racers to Converge in Sandy Creek Feb. 1 and 2 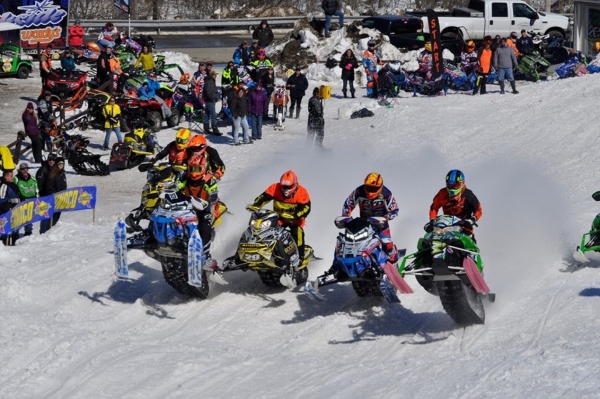 OSWEGO COUNTY, NY – Weather permitting, a popular track shifts gears Feb. 1 and 2 when the 2020 Eastern Snocross Tour (ESXT) brings snowmobile racing to the Oswego County Fairgrounds in Sandy Creek. For more than a century the fairgrounds have hosted harness racing, demolition derbies, and antique engine competitions, but on Feb. 1 and 2, pro riders from around the east coast and beyond will navigate high-performance snowmobiles on the snow-covered course in the village of Sandy Creek.

Officials at East Coast Snocross said that for the first time in series' history, all of Saturday's final races will be run at night “under the lights” to add a new and exciting twist for spectators. Night racing brings out the colors and speed of snocross. Vintage snowmobiles will race both days.

“Our host group in Oswego County is putting a huge effort into preparing for this event,” ESXT general manager Shawn Longbook said. “They know what they need to do to make the event a success. We'll have a purpose-built track there for vintage classes, as well. This will be an exciting weekend.”

“Our county fair is a traditional family-oriented event with a colorful, 162-year history,” said Sweeney. “With the amount of snow that we receive annually, Eastern Snocross is a natural fit to celebrate winter and bring another family-friendly event to the fairgrounds.”

Ingles Performance will provide two new Ski-Doo snowmobiles for on-site use by ESXT officials during the 2020 season. With this partnership, Longbook said, Ski-Doo is now the official snowmobile of the Eastern Snocross Tour.

“We're honored to have Ingles Performance join our family of partners for 2020,” he added. “They are the biggest Ski-Doo dealer in the east and have won numerous awards. They have a rich history of customer satisfaction, and of supporting snocross. We put great value in their support.”

Owners Mike and Robin Ingles started the business in 1981 as a motorcycle repair shop. The business grew rapidly, and the Ski-Doo line was taken on in 1986.

Other local sponsors include Bardy’s 4 Seasons Tire and Auto Repair of Sandy Creek, and Custom Novelty Prints of Mexico.

The Eastern Snocross Tour was formed by a handful of industry veterans in the fall of 2019. Led by owner Bruce Gaspardi Sr., a respected powersports dealer from western Massachusetts and longtime snocross supporter, the new series is keeping snocross racing alive in the northeast.

For more information on the snocross event, visit https://www.facebook.com/esxt28/

The Oswego County Fairgrounds are located on County Rte. 15 in the village of Sandy Creek, just off Rte. I-81 between Watertown and Syracuse. For Oswego County visitor information, go to www.visitoswegocounty.com or call 1-800-248-4FUN.

SLEDS LAUNCH UP THE HILL at a snocross racing event. Spectators at the Sandy Creek Fairgrounds Feb. 1 and 2 can expect to see similar action. (Photo by Katherine Images.)